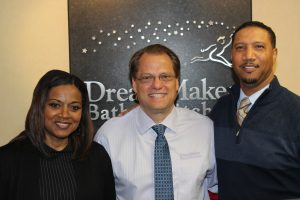 A little about us..

The interest in remodeling was birthed by the blue collar PRIDE of Steven’s family roots. Steven’s grandfather was a carpenter and his dad repaired radios, TVs, and appliances. He always thought it took a special skill to master certain tools. It became a reality after purchasing his first home in 1981. Steven and Cheryl got married and continued to purchase and remodel homes. He finished building trade school and a 4 year apprenticeship in 1992.

Steve has won several awards including:

Steven and Cheryl love remodeling and truly satisfying their clients. They love partnering with and inspiring their customers through innovation, strong work ethics and clear communication.